Why the Clamor for Leadership Transparency Is Childish and Unrealistic

Employees in business yearn for transparency. They say that it’s a leadership requirement. Yet being open about what’s really going on is not realistic. Transparency does not and will not ever exist in executive suites around the globe. Here’s why. 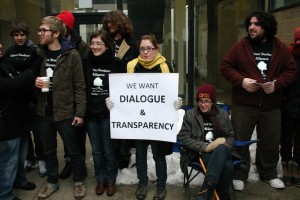 There will always be pockets of transparency. For example, a friend of mine runs a successful technology business with 40 employees and has completely open books. He shares all financial information with all employees every two weeks, including profit and revenue.

And you will find some companies and leaders who are as open with their people as they can be about what is going on. Some share what’s going on, with a wink and a nod. Some share behind the scenes politics and intentions.

However, when you look to the companies heralded as leaders in organizational leadership: Facebook, Google, Apple, Tesla, Amazon. They all operate in an environment of secrecy.

Facebook, the company with the mission to make the world more open and connected, keeps secrets. There is a general need-to-know attitude so as not to share secrets with competitors. This makes good business sense. Why would they or should they change that?

Amazon doesn’t publish which building are theirs in Seattle; not even signs outside. Employees must meet friends for lunch at predetermined locations in the neighborhood.

Apple compartmentalizes their work so that you only know what you’re working on and not what other departments are working on, on a need-to-know basis like a top-secret government clearance system.

And let us not forget the GM debacle of hiding ignition system problems and Volkswagen lying outright about their emissions testing.

I’m sure everyone reading this has their own stories of the lack of transparency of leadership in their company. There is no way executives can or ever will be transparent with employees.

Is this because they are bad leaders? Sometimes. Or is it because transparency to the level that employees want it is not possible? Yes.

Having coached and advised C level executives for over 15 years, I have heard many secrets. While early in my career I, too, thought executives should share more, I learned in the trenches how hard it is. Here are some concrete examples of transparency challenges:

•  The CEO who one day told his management team what a highly valued division they were leading and how important they were to the business. The next month, he sold that division. Not transparent! Bad leader! No. He couldn’t tell his mid-level managers the truth because he was in negotiations for that sale and it wasn’t public yet.

•  The CEO who was very disappointed with an executive’s performance on his team but can’t tell him because of the lost business deals if he replaced him too soon. Weak leader! No. Smart business decision.

•  The CEO who knows that one of their executives is an alcoholic but can’t share that, even with the leadership team, to explain their behavior. Dishonest! No, common decency.

•  The CEO who is disgusted with the CFO’s behavior and how he treats others but can’t acknowledge it or address it because of the huge financial issues at stake behind the scenes. Enabler! Maybe short-term, but he needs time to work out a suitable replacement.

These are all real situations that I’ve seen upfront and personal. There are things that executives will never, can never, and should never share in an open and transparent way.

And yet employees will be angry and upset about these situations. They will talk to others about being betrayed. They will undermine their business leader because of it. In essence, they are holding up their leaders to a bar that cannot be reached.

I say “Give it up.” The pursuit of transparency is a red herring. It is simply a means for childish and unrealistic people to attack leaders in the same way that they were/are upset with their parents for not being the parents that they wanted them to be.

The problem is, of course, lack of transparency in areas that should not be kept secret. Often the key part of our firm’s job is to create more transparency within the executive team; to bring up issues that haven’t been but should be brought up because they inhibit teamwork.

While employees will always think you are not sharing enough, here are ways that executives can and should be more open and transparent to create more teamwork, better engagement, and better results:

• Have the courage to admit and correct mistakes – The CEO above who one day said the division was awesome and then sold it – we learned while doing a project with his management team a year later that employees were still holding it against him. He was shocked. So, at the management event we were doing, he got on stage and took 15 minutes to open his heart to his management team of 125. He explained how he lost sleep about not being open, how it violated his leadership principles, and yet why he couldn’t be open at the time. He then apologized. The team forgave him that day and they moved on. This is the kind of open and honest dialogue employees yearn for.

• If you ask for input, explain the final decision – This sounds obvious, however many executives ask for input and then make a decision without telling their team why they decided to do what they did. People being people, they assume the worst: that their leader didn’t like their idea, that their leader is playing favorites, or there are politics involved. Often the leader’s decision is based on a set of criteria that they don’t share. Share the criteria ideally before but even after the decision is made so people feel you are being transparent.

• Share your journey with your team – All executives are flawed. When you try to hide your flaws by not discussing them, your team judges you as not open/transparent. One executive from one of the biggest Palo Alto technology companies got coaching because he was, as his daughter confirmed, “not a nice person.” He openly told his team about this (which was no surprise to them), and then shared his journey as he learned how to be more empathic and collaborative. This increased trust and enabled him to create a true team.

I’m not saying that people at work shouldn’t be open with each other. Of course they should, and they must. Teamwork collaboration and cooperation is not possible without it. However, transparency is a 2-way street. The high level of expected transparency and the level of frustration of employees’ experience from it, is clearly childish and has to stop if companies are to create a high level of engagement.

To book a 15-minute free consultation with Lawrence to discuss how to elevate your team’s performance, click here.