How to Apply Tom Brady’s Emotional Leadership to Your Team

Tom Brady played every play in Super Bowl LI like the previous. With calm confidence. It didn’t matter what the score was. It didn’t matter if they were down 21–3 at halftime or moving towards a tie at 28–20 in the 4th quarter. There was the same emotional tenor all the time. In the huddles and on the field. They were playing the game, play by play. No upset, no excitement. Just playing the game. This was not an accident. This was by design. This is the design of Tom Brady, whose emotional leadership created a team ready to win when there was the opportunity. 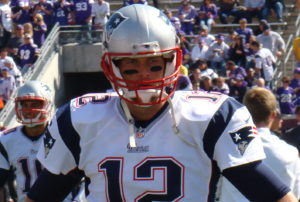 In the pregame interview with Terry Bradshaw, Brady acknowledged that his team feels his energy. In the huddle especially, they pick up his energy. He has 10 people feeding off his energy. Fear creates fear. Confusion creates confusion. His approach is to act with confidence that they are going to succeed so that the team approaches each play with calm confidence.

It makes perfect sense to me. I get to see many leaders up close in many industries and many situations as I consult to them, and after a while it becomes clear that the leader of the team is creating the energy of their team. If she is an innovator, then the team is an innovator. If he is political cover-your-ass guy, then so is his team. If the leader is a conflict avoider, then so goes the team. A global research study of thousands of leaders and their teams over decades showed that at work, the energy/motivation/enthusiasm of the team is never higher than the leader. The leader defines the energy of the team.

This does not mean that Brady is not emotional. Of course he is. You can see his intensity on the field. You can catch glimpses of not upset, but in his eyes you can see how him not winning was driving him to be more focused and to be present and play each play as it is meant to be. And of course his joy when they won. The point is that he is controlling and directing his emotions to serve the team.

It also doesn’t mean that Brady was pretending everything was OK and just kept doing the same thing. When they were losing, they changed their plays and strategy. They tried several trick plays: onside kick, direct snap to the running back, pass by the wide receiver. The gave up running the ball. The leader changed plans and did so with calm confidence.

* Believe in your team. If you can’t believe that your team can achieve the goals you set for them, they you need to either get rid of some people or take the time to develop them so they can succeed. Or leave the team yourself.

* Put on your game face. Being a leader is a role. As Shakespeare said “All the world is a stage. And all the men and women merely players.” As a leader, you are on stage. Your team is looking up to you on that stage to figure out how to react. A key part of your role is to believe. To believe it can be done. To believe in where you are headed. That is why Boards hire CEOs that are more optimistic than the average person. So when you don’t believe, put on your game face and act like you do. When your yearly game is headed off course, keep on your game face and plow forward with calm confidence.