Most people have no idea who Mordechai was. Yet, if you are in a leadership position, or a consultant to leaders, he is your professional ancestor. He facilitated important organizational change in 600 BC, improved and saved lives, enabled a significant promotion of someone, and was instrumental in the firing of a corrupt senior leader. His story reads like an overly dramatic version of my work life, and probably yours.

Mordechai is a character in the biblical story of Purim. Purim is a Jewish holiday this weekend that celebrates the success of Esther and Mordechai. The parallel of Mordechai and organizational leadership is clear. 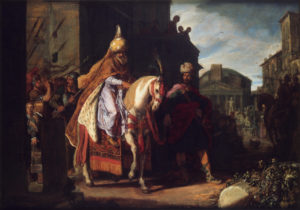 The Triumph of Mordechai by Pieter Lastman

Mordechai heard through the grapevine that there was a plot afoot to kill all the Jews in the Kingdom. By the way, many of the best stories in the Old Testament are about Jews getting saved from being killed. (Noah builds an ark and is saved from flood; Isaac almost killed by his father Abraham but saved at last minute by an angel; Moses saves the Jews from slavery and the Pharaoh….)

Anyway, when Mordechai hears of this plot, he does what any good organizational leader or org consultant does in such a situation: everything possible to avert a bad outcome and save the company (in this case the Kingdom) from destruction! So, Mordechai finds the most influential person in the Kingdom (Esther) and persuades her to use her influence on her husband the King to stop this plan. He also secretly hides messages in pastries to get the word out to other Jews that this plan is afoot – which led to the Purim tradition of eating pastries with pockets filled with jellies.

The additional interesting leadership element of this story is that the most trusted advisor to the King, Haman, is the one plotting to kill all the Jews. So not only does Esther and Mordecai have to convince the King to stop this plan, but it is a plan led by his most trusted lieutenant.

When I say I am Mordecai, I am not so egotistical to believe I am saving lives in my job. However, sometimes it feels that way. Mordecai is a metaphor for what leaders do. Some of the key elements of Mordechai’s leadership that apply to any leader’s success are:

* Get in touch with what is really happening below you.  Too many executives are oblivious to what is really happening. They are often so absorbed in the long-term planning that they lose touch with day-to-day. That’s what Mordechai did, and it ending up being the difference between life and death. I have the greatest respect for executives who hire me and our company. Ultimately, like Mordechai, they want to know what is really going on and make it better. They are open and willing to hear the truth from the point of view of their employees, and then they act on it in the interest of helping the team and company. The best leaders listen to their people, and it often saves the day. Walk around. Say hello to people a few levels below you. Ask them what’s going on. You will hear what’s happening.

* Trust your people 2 levels down ahead of trusting your lieutenant.  Everyone has an agenda. Even the people right below you. Power, status, and influence are often at the top of list for executives and junior executives. Not that that is bad in itself; it’s not. But it can cloud judgment. Recently, I worked with a team and, in fact, one of the most trusted people in management was the source of most of the problems. He meant well, but was very misguided. And top leadership couldn’t see it. They were isolated from their front line and missed all the cues. Esther (through Mordechai) heard what was really going on from the “front line,” and by knowing this, they were able to turn the tide into a positive outcome.

* Stand up for what is right, even at the risk of your position.  In the story of Purim, while Esther was Queen, she was an “at-the-will-of-the-king” queen. She risked her position as Queen, and ultimately her life, by speaking up and asking for the King to change his mind. This was 600 BC in Persia, after all. But Esther stood up for what was right, despite the risk. It turned out her risk paid off because the King had never decided to kill the Jews. It was all the doing of his lieutenant Hamas. He had made the plan. Much of the time, standing up for what is right works at work. However, I am not so naive to think standing up always works. Sometimes it can cost you your job. But that is what leaders do. Followers are quiet.

* Weed out negativity.  Haman represents organizational management that is misguided or incompetent. There are both in leadership ranks in most organizations. You must find those people and deal with them directly and strongly. (Haman was hanged, which I don’t recommend as a HR policy.)

* Recognize the do-gooders.  There is a tradition when you tell the story of Purim that every time Mordechai’s and Esther’s names are mentioned, people cheer or clap! They are acknowledged by the congregation throughout the temple. And in the story, Mordechai and Esther are the heroes. The painting at the beginning of this article captures it best. I didn’t realize until I wrote this and searched for pictures that Mordechai was a common concept to paint – even Rembrandt did one of him.

On my best days, I feel like Mordechai – doing everything I can to save the day. I listen closely to people and hear what is really going on in the organization. I find the leverage points to stop negative action. And I help the team move forward to success. While I am not saving people from being killed, it sometimes feels like life and death. And for some of the leaders I am helping, it feels like life and death to them, too. Getting results can be the difference between keeping their job or not; getting the next promotion or not; or getting a bonus or not. For some of the team members, it is the difference between a job that is stressful and unfulfilling and one that is productive and rewarding, with more open, clear communication and better collaboration. And with all of this, I feel a little like Mordechai. I hope I am. And I hope you are, too.