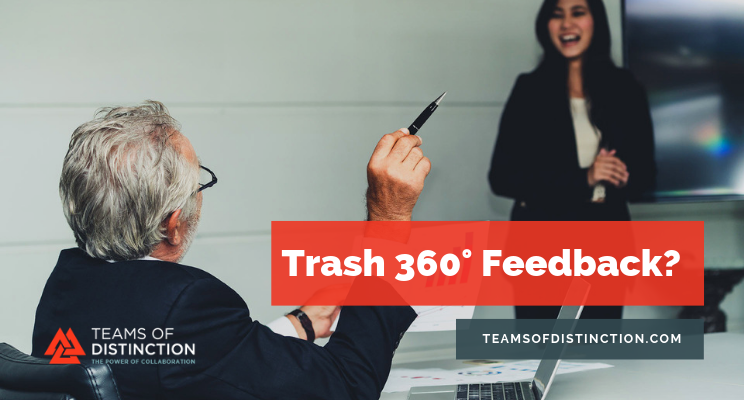 When used appropriately, feedback from 360’s is an outstanding way to grow talent, increase team and company performance, and uncover blind spots. All this can be done without hiring expensive outside consultants – because your colleagues know your company best.
However, the power of 360’s is rarely fully leveraged. Too often, they are hijacked and used for the wrong reasons. That has made people suspicious and even sarcastic about 360’s. To avoid these traps, we recommend three 360 feedback strategies:

360’s are frequently misused to influence decisions about bonuses or to deliver a rationale for firing a leader. These are “no-no’s!” Once you use a 360-process for any of these reasons, you will never be able to gain back the trust needed make a 360 effective. It will only encourage people to be dishonest or avoid issues, fearing the negative impact of their feedback.
If I know that bonuses depend on my feedback, I’ll avoid discussing any issue which would bring those bonuses down. And if a 360 has ever been used to find reasons to let someone go, even if that is not stated openly but seems obviously clear, employees will always have it in the back of their mind that giving honest feedback comes with negative repercussions. This will undoubtedly color responses.
Just last week, I talked to a CFO who called a 360 with a direct report that had been working with him for 10 years. The intent behind the 360 was to entice the direct report to increase their talents and leadership skills in order to rise to the next level of performance. But because of the way 360’s had been handled in the past, the reaction from the direct report was the opposite: “What’s happening? Do you want to fire me?”

2. Be clear about what’s being done with the feedback.

Survey participants will always wonder: “Is this anonymous and confidential? Who is going to see the report?” If a boss or colleagues can guess which employee gave any given piece of feedback based on the ratings or type of answers, who’s going to be honest with their criticism or concerns? Be sure to address confidentiality up front so that people will have the confidence and feel able to give honest responses before the surveys begin.
Also, always give return feedback from your 360s. Thank the participants for their candor and let them hear what you understand them to have said. Approach their issues candidly and offer resolutions about how their concerns will be approached. Giving a participant “feedback about their feedback” will make it more likely that the next time they get a 360 request, the individual will be a willing participant in the process. Otherwise, they are likely to brush off the request, believing that their feedback won’t actually make any difference.

Be sure to debrief your 360 every time you hold one. Don’t just distribute a report without offering proper conversation about the results with a HR person or an internal (or external) coach. Instead, meet with each individual and look at the results together. Make sure executives look at the feedback with an open mind. Tell him or her to be careful not to make excuses where they’ve received criticism or to dwell on discovering who said what. Instead, tell the people receiving feedback to capture key conclusions, determine if they have questions, and develop methods to integrate helpful feedback in ways that will benefit the organization. Then, encourage them to go back to their survey participants and share the results of the 360, to give them “feedback about their feedback.” At this point, the leader has the opportunity to clarify any questions that came up when looking at the report to give them an additional depth of understanding.
The combination of meaningful participation, a proper debrief, genuine reflection on feedback, choosing appropriate actions, and publishing those actions with the participants is a powerful package. You will never want to get rid of 360’s. However, it is an involved process and represents a great deal of time commitment by all involved parties.
Use 360’s with your top performers and high potentials. Being invited to have a 360 is a badge of honor and a key improvement opportunity!